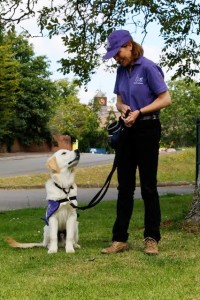 The Pandora Inn supports the charity Canine Partners. We thought you’d like to read an update on how the sponsored puppy, Tribute, is doing.

“Tributer, the Golden Retriever is growing up fast and developing into the most beautiful young dog of six and half months. His puppy ‘parent’, Alice, says he is still a joy to have around, which is saying something as, like most dogs his age, he is approaching the more challenging teenage stage for puppies. Tribute still attends weekly puppy classes where his progress is watched with a keen eye by the trainer, Heather. He is learning more commands and having them reinforced regularly so they become second nature to him.

One of the things the puppies are taught early on is to settle quietly on a mat beside their puppy parents so that when they will be out with their disabled partner in the future, they are not fidgeting or causing problems. Tribute, when he is fully trained and matched to someone with a disability, will accompany them into public places where pet dogs are not allowed to go – food shops, restaurants, entertainment premises – so he must be able to lie down quietly for as long as is necessary without causing any fuss or noise. Alice has been practising with Tribute, taking him to talks, and he settles nicely beside her. Recently they visited a couple of primary schools, and Tribute was very gentle and patient despite all the little hands that wanted to stroke him!”

FIVE THINGS TO DO AROUND THE PANDORA INN!

While we’ve been in lockdown, we’ve had time to look more closely at what’s on our doorstep. Admittedly, the Pandora is...

GIN – THE RISING STAR OF THE SPIRIT WORLD!

It’s hard to believe that, until a few years ago, gin was considered old-fashioned. A pink gin or a G&T were definitely...

While we are closed, we’ve been thinking about ways to keep you entertained and (hopefully!) amused! We’re taking a look ...

While so much is different at the moment, it's good to know some things remain the same. The Cornwall Tourism Awards are unde...

CIDER – YOU’D BE HARD PRESSED TO FIND A BETTER DRINK!

The West Country tends to think of cider as its own, but it is brewed around the world in many different styles. It’s an an...